There are some great stories about the Bledsoes. We thought we’d share some of them with you.

Introducing the Bledsoes
Elma Bledsoe was our mother’s mother. She was born in 1904 and was one of six daughters of William Bledsoe and Margaret (Maggie) Jones Bledsoe (who also had a son who died as a baby – giving rise to a family story about a cow struck by lightning). They grew up in the Big House in Atkins, Arkansas, where Will Bledsoe ran the pharmacy and Maggie (known to us as Mama Bledsoe) took care of the family, the house, the washing, and the sewing. 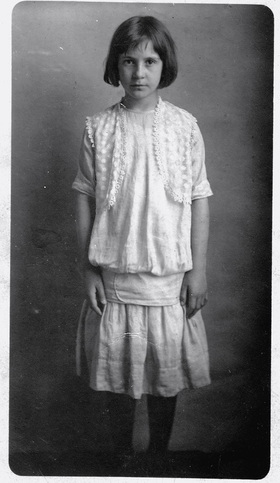 Elma, our grandmother, at about age 8

All the sisters had a nickname. There was Dood (Mary Sue), Tid (Elizabeth), Boo (Maggie Mae), Bun (Bernice), and Ginger (Virginia), the youngest. Our grandma was Dickie (Elma). 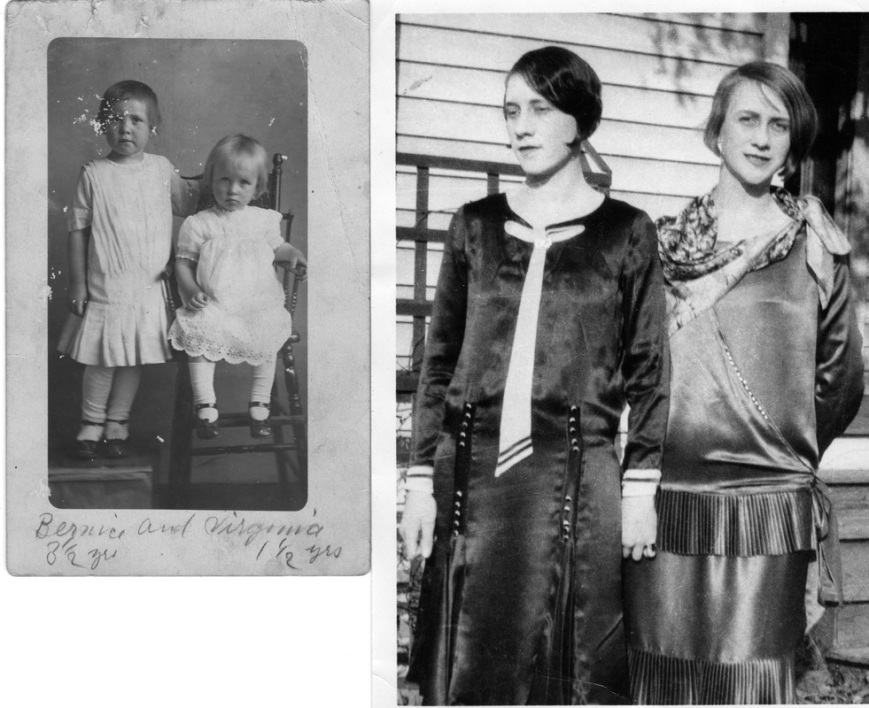 The two youngest Bledsoe girls, Bernice (Bun) and Virginia (Ginger) as toddlers and teenagers. We don’t know who made the glamorous dresses.

The story goes that Little Elma, a toddler, took some salt out into the front yard of the Big House and was chasing birds. She planned to sprinkle the salt onto them so that she could catch a bird for herself. The Mother Goose rhyme she must have heard is “Simple Simon”, and part of it goes like this:

“Simple Simon went to look
If plums grew on a thistle;
He pricked his fingers very much,
Which made poor Simon whistle.

He went to catch a dicky bird,
And thought he could not fail,
Because he had a little salt,
To put upon its tail.

He went for water with a sieve,
But soon it all ran through;
And now poor Simple Simon
Bids you all adieu.”

After that, she was called “Dickie”. Our mother thinks she must have liked this nickname because she used it to sign her graduation picture when she graduated from Galloway College. 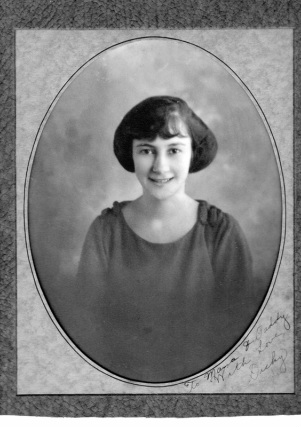 Elma at 16, signed “To Mama and Daddy, With Love, Dicky”
Galloway College

That graduation photograph was taken for Elma’s parents. Grandma included in her memoirs a chapter called “The Galloway Years”. It starts like this:“In the fall of 1920 I packed my trunk and boarded the train for Searcy, Arkansas, to go to Galloway College. It was a girls’ school; Dr. J. M. Williams was president.”Just barely 16, the young Elma was excited to be going away from home for the first time. She cut her hair short, something which later upset her parents. She roomed with her older sister Tid. Tid and the eldest, Mary Sue, had gone to Ouachita College for two years and though they loved it, their father didn’t, because the president refused to let parents talk to their daughters while they were at the college (or at least that’s how Elma remembers it). Mr Bledsoe was unusual for his time in insisting that all his daughters got a college education.

In this extract from “The Galloway Years”, Elma tells what life was like at Galloway, and she mentions that photograph signed “Dickie”: 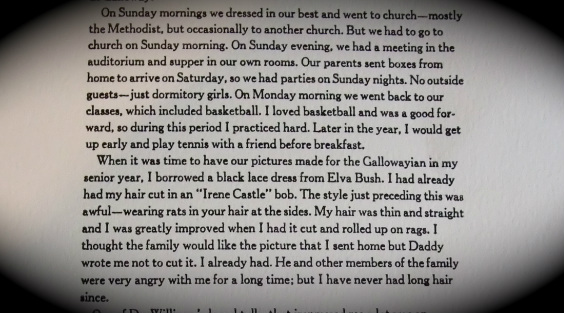 Elma remembered her Aunt Jonnie as a major influence. Jonnie was Will Bledsoe’s sister, a first-grade teacher in Little Rock, Artkansas, and a true Victorian lady. Aunt Jonnie lived in Atkins with Will and Maggie Bledsoe and their girls, and she spent vacations with them. Elma remembered helping Jonnie cut out pictures to use in her classroom; she remembers the books and hair ribbons which Aunt Jonnie brought with her from Little Rock to surprise her nieces. In the picture below Elma (left, bottom row) and Maggie Mae (top) wear some of these fancy hair ribbons. Their cousin Vida Sue (Fuller Bledsoe’s daughter, and original owner of Bledsoes’ Sew-n-Sew mascot) also wears a ribbon. 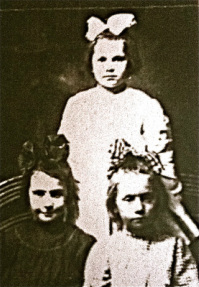 Will and Maggie Bledsoe, probably with Jonnie’s encouragement and financial help, sent all their six girls through college, an unheard-of achievement for those times for a small-town pharmacist. Will owned the Atkins Drugstore on Main Street, just a few blocks from his home. Elma remembered the scurrying about which took place as soon as someone spotted Papa on his way home. She also remembers that Mama rarely went to town: she had her own cow for milk and butter; she had her garden for vegetables and fruit, with the pantry full of canned vegetables she had “put up” during the summer. She would send children to buy a spool of thread at Woolworth’s or to pick up a cut of beef she had ordered from the butcher. 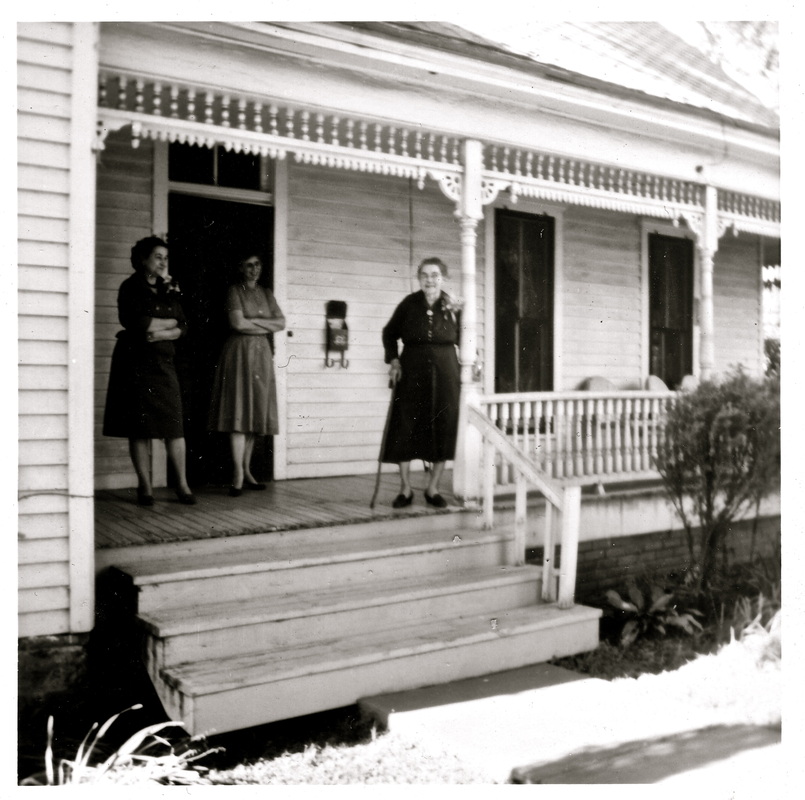 Mama Bledsoe, our great grandmother, on the porch of the Big House in Atkins, Arkansas. It was Mother’s Day, 1960, and our grandma is here too, first from the left. 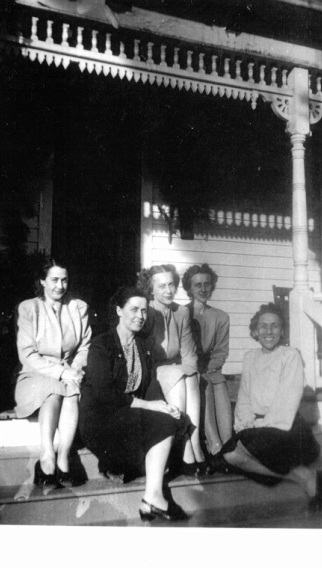 The Bledsoe sisters (minus the eldest, Mary Sue) on the porch of the Big House in Atkins. From left to right: Elma (Dickie), Elizabeth (Tid), Maggie Mae (Boo), Virginia (Ginger), and Bernice (Bun).